Just a Few Tidbits This Morning

Good morning and welcome back to Ridin Out the Recession. We hope all are well, and wherever you’re at if spring hasn’t sprung for you yet, we hope it’s just right around the corner for you! It was 94 degrees here today.

Soda Apple: Today if you guys don’t mind, I’d like to talk about the soda apple. In regards to ranchers, and citrus growers, here in the State of Florida, but mainly the cattle ranchers, we have a problem with this plant, and have had for many, many years now.

These plants I remember distinctly while working on the ranch. They’ve been in Florida about 20 years now, and were first discovered in Florida in Glades County. If you’re involved in the cattle industry here in Florida, you know the soda apple, or have known the soda apple first hand.

When you talk about an invasive species of plants, this has to be in the list. These plants will absolutely take over your pastureland, if nothing were done to stop it.
Back when I was working on the ranch in Kenansville, this is where we had our first contact with this plant, and has since spread to the other two places. We first started noticing it heavy, in one pasture particularly, and it spread from there.

I’m guessing this one pasture was probably 50-60 acres, and good grass. It seemed like in no time at all, this plant had almost completely taken over the entire pasture. Seriously, this soda apple plant seems to grow leaps and bounds daily.

First off this was probably around 1991-92, and it had been in Florida, but hadn’t really gotten to our area heavily. The ranches are in Osceola County, which abut to Polk, where Deb and I live.

The problem we first faced was basically no knowledge of how to combat this plant. We have always been on a mowing program, where when we’d move the cows in the summer to other pastures, we’d drag the pastures busting up the manure (cheap fertilize), then mow it.

Not knowing we were hurting more than helping. We did this by thinking our mow programs would help our problem. BUT, we were actually spreading the plant even more, because we were mowing the soda apple AFTER the fruit was on the plant. So when we mowed, we were literally broadcasting the seeds over the entire place!

The fruit I’m speaking off, is a round shaped seed pod, and looks almost exactly like a little watermelon, little dark stripes, against a color background almost identical to a watermelon. These fruits, or seed pods, are just absolutely LOADED with seed, and man, we had gone into the farmin end of soda apples and didn’t even realize it!

So with our help, the soda apple was off to a running start on Dad’s place! To make matters worse, the cows loved the fruit, so they were sowing seeds as well. The soda apple was beginning to call our place home, and I believe it got to the point, they looked at Dad’s place like Disney World…it had become literally, a resort!

I talked with my oldest daughter Michelle, and she said they are a lot better, but the problem they still have is the plants coming up in the swamps. What is happening there is that being back in the swampy areas, they’re still reproducing, and not being treated.

With this the case, the cows are getting back in there, still eating the seed pods, and still spreading the seeds through their manure.

Again, the soda apple problem is much better, but at this point we believe it to be a control situation, and may never be complete eradication.

The cows won’t eat the plant, possibly they don’t like it, but the plant is just covered in sharp spines, or stickers. You can’t pull them up without gloves on, and if you do, well, you’re one tough moutha! 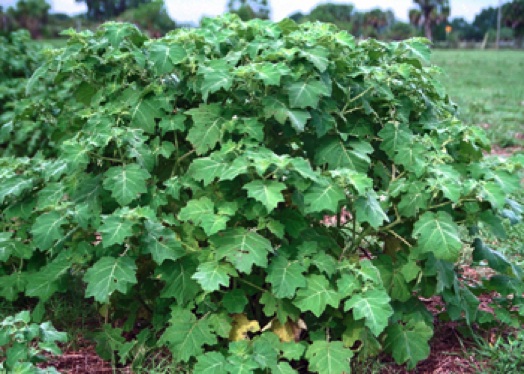 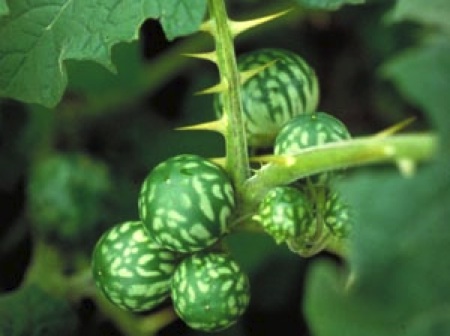 The Fruit or Seedpod of the Soda Apple. Check out the thorns!

Not only do the cattle spread the seed, but also much of the wildlife feed on the fruit too. Birds, raccoons, deer and hogs all eat the fruit.

Even the hay you’ve cut for winter feed may contain seed, so it can be transferred this way as well. So, as you can see, it is a continual fight in regards to this plant.
The soda apple today in Florida now covers over 1 million acres, and has spread into Georgia, Alabama, Mississippi, and Texas.

Florida cattle ranchers have spent as much as $16 million a year in combatting this plant over the last 20 years.

But now the University of Florida has released a beetle from South America that feeds on the plant, and this has resulted in some success. Since 2003, over 200,000 beetles have been released and are now established in Central and South Florida.

One rancher, who was spending as much as $25,000 per year, now is spending nothing, and says he has reached a “biological balance” and that “when the plants started growing in the spring, the beetles would appear a couple months behind them. The beetles would feed on the plant all summer long.”

It is native to Brazil, Paraguay, and Argentina.

Mowing does help reduce the spread of the plant BUT only prior to bearing fruit. Then you continue to mow when you see flowering starting again.

To dispose of the plants, if you’ve harvested them in some form, is piling them up, and burning them, or burying the plant deeper than 3 feet.

I got to wondering the other day about the soda apple while riding around at our place. When we first bought this place I did see a FEW soda apples, but we dug and disposed of them immediately. Since then, I’ve not seen any, but I’m “knocking on wood,” as I’m making that statement!

Anyway, I thought you guys might like to read about it some, and I enjoyed looking up a little research involved in it.

The soda apple is still a big concern to a lot of people to this day, but looks as if it may be a concern for many more to come!

Thank you guys so much for coming by today, and look forward to visiting with you all, many, many more times in the days ahead! You guys are great!
God Bless!

5 Responses to Just a Few Tidbits This Morning