Before we get started this morning I have just heard something I found very interesting. It’s about 4:30 am, and while I was making my first cup of coffee this morning a special report flashed across the TV screen.

It was President Obama with an announcement into the investigation of the earthquake that happened in DC. At first I wondered aloud about what type of investigation could be performed on account of an earthquake?

This was especially true since standing right beside the President was Eric Holder. Again, I was asking myself what in the world was Eric Holder involved in an investigation into a dern earthquake?? After the President turned the press conference over to Holder, the answer to my question came very quickly…

Holder just announced that the earthquake in DC was attributed to being but one of the many problems that were actually caused by our last President. From here on out, the current administration will refer to the cause of the DC earthquake as being simply…“Bush’s Fault!” Imagine that! LOL!

I got that the other day from a friend, and thought it typical of our current administration…
We have a new reader from Washington State, Jill, and Jill has been canning for while it seems, and had a question in regards to canning ground chuck, or regular hamburger. It was asking about using the oven method.

We just use the skillet and the oven method and no water as you’ll see below, but we also have browned it, and canned it in water in the mason jars as well. These both can then give you hamburger you can keep, basically on the pantry shelf for quite a long time. 2-3 years easily.

This is very convenient for freezer space, just like the canned butter, it gives a good long storage period, no electricity needed, just keep it in a cool dark spot, and is very easily converted into a good hot meal in a very short period of time, as the meat is already cooked.

You won’t have hamburger patties, but you will have hamburger readily available for spaghetti and lasagna sauces, it can be mixed with eggs for breakfast lunch and supper, and makes good hamburger and rice fried together as well…this is good when you throw a couple eggs in it too.

This storage method is perfect to use as tacos, shepherd’s pie, soups, and many other ways.

Now Jill, we also do it in soups and stews already mixed and cooked together and canned. There is liquid in these, but we do hamburger meatballs as well, and these we do use liquid in, and this is hot water. We just brown the meatballs, and then pressure cook in the hot water in the jars.

Now, I like your idea Jill, of a broth to use to for flavor. We’ll have to try that one ourselves. This is what we like about our column…so many people with different ideas and ways of doing things that comment on and share with us all their ways. Then all we have to do is find the way that works best for you.

We will put up a couple pictures of two ways we do it at the bottom of today’s column. One is of the meatballs we did, and the other is the skillet and oven method with liquid. Our canned hamburger without liquid we’re out of at the moment, but we’ll be canning some more very shortly and we’ll put a couple of pictures up of that procedure as well.

We were out of our canned hamburger, but our good friend in North Carolina, Bonnie, sent us down a jar of her canned ground chuck via her brother, Denny, this is in a liquid.

Let me say this too. IF you have any questions in regards to canning just ask us a question and I’m sure ole Bonnie wouldn’t mind in the least supplying you with an answer, or at worst where to look for the answer! I call Bonnie…the “master canner!”

Denny is a sheriff here in the county where we live, and he dropped this off and a couple other things off to us as well. Boy, you wanna talk a couple great people? Well, Denny and his wife both fall into this category! We haven’t spoken to them in a while so let Deb and I both holler out to them this morning! Hey guys!!

We want to thank you for bringing this up again Jill…it got Deb and I to thinking we probably need to can up about 20 pounds of ground chuck out of the freezer and free up some space number one. Number two is simply for having some stocked up, for later use…think once more of convenience.

You see, when Deb and I catch it on really, really good sale, we’ll buy 30-40 pounds of ground chuck, put it into 1-and 2 pound quantities, then food saver them. Keeps them very fresh, and NO freezer burns!

If you guys have any way possible to do the same, buying up extra meats, I feel strongly you do so. First hamburger is a meat that doesn’t take a long time to prepare, has no waste factor, is still reasonably priced, IF you catch it on sale, but make sure it’s a good sale, then stock up.

Hamburger is also a meat that is just so versatile. The number of different meals you can prepare with this as your meat of choice are basically without limit. I mean think about it, using hamburger in some type of recipe, really, the sky is the limit.

It is a priority in regards to our meat storage. It has too many plusses, and very few negatives…we feel it is just a good storage choice. Plus, mixed in soups, casseroles, and in so many other ways also…a little bit, goes a LONG way!

Now, I have a question for our readers, so help us out here on this one.

One other reason behind Deb and I fixing to can up some ground chuck is like I said earlier, freezer space. But there’s a reason for this. We have our peas planted, and before long we’ll be picking, shellin, and cannin peas.

You know that we juice quite about in Deb’s regard. When our fresh produce is coming in, we juice some of all of it. Peas, okra, beans, squash, cucumbers, and tomatoes.

My question is this. IF we took some un-shelled peas and okra, straight off the bush and we froze them…could we take them out at a later date, thaw them, and still use them to juice? Would nutritional value still be there? We’d appreciate your input!

Canned ground chuck:
The way we do it, is to fry our hamburger, ground chuck, etc., browning well. Then drain off the grease after it’s cooked, and rinse the meat off using hot water from the tap, keeping the meat in a colander while so doing. This on account of trying to get as much grease as possible off it. Then lay the meat out to dry on paper towels, but mainly we do this so we can dab at the meat with the towels, to try and get even more grease off.

Have your seals and rings (lids), in a pot of hot, but not boiling water.

After drying or dabbing, we then put meat back into the skillet, just long enough to reheat it, NOT recook it.

We then put the meat into pint, Mason Jars, filling them to within an inch or two from the top, but be sure to leave a gap. We use small-mouth or wide-mouth jars, basically whatever we have unused at the time.

Listen for lids to seal. After cooling, be sure to check each lid by pressing down on the top with a finger. If no movement, the jar is sealed. If you press down and then hear a pop, or there is “give” in the top, the jar didn’t seal. Set this aside and go ahead and use it.

We hope this helps you guys out this morning! If you haven’t started trying to put up a few extra food supplies, please look into possibly considering this move. Food prices are steadily going up, or have you noticed? Toilet paper was $1 a pack more than the last time we picked some up.

Much of the sugar is in 4 pound packs instead of 5, even cokes are going into 20 count cases now. Many, many things today have had package size reduction. Less product for the same money?? Putting some up now, may save you time and grief down the road.

Bonnie’s ground beef. I went to get a jar of our meatballs we had canned, and Deb told me they’ve been used. We’ll can you guys a few jars of those up for you to see as well. This turned out good though, huh?

Peas in the raised beds… 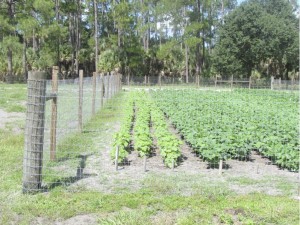 On the left is 3 rows of okra. The rest are peas. 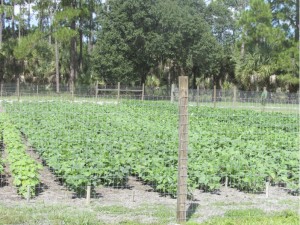 More peas…from the okra over to the last 7 rows on the right, these are crowders and purple hulls.

Look how well the black eyes are doing…almost a full third taller than the other peas.

You guys have a great day, and God Bless you and yours! Deb says to keep a smile on your face, and one in your heart!!

This entry was posted in Covering the Bases. Bookmark the permalink.