Good morning. We hope all are well today, and everyone is having nice weather.

As I’ve been saying, our rainy season has finally arrived, and we sure are reaping the benefits from it. Everything outdoors is really starting to standout, and grow.

We just fertilized our pastures yesterday, and this will give them a boost nutritionally, in regards to the cows. We always keep mineral out in a couple boxes for them throughout the year, but their usage during spring and summer is very light compared to fall and winter when the grass just has no nutrient value at all.

I know Sandra and Bonnie both have talked about burning off the pastures, and back before commercial fertilize came about, and even after, ranchers still burn off pastures and scrubland. The grass after a burn comes back so pretty and green, and this not only benefits your livestock, but all the wildlife as well.

A burn was called, “poor man’s fertilizer,” and that’s exactly what it was, and in many cases still is. I know my brother Shane burns when he can.

It’s not just beneficial from the nutrient value in the grass it supplies, but also helps prevent major wildfires if done once in a while. By the rancher burning pastures and woodlands off occasionally, it destroys old underbrush during a burn, and by doing so, this prevents so much “fuel,” from continually building up through years and years of being left alone.

It also destroys some of the older or weakened trees, thus opening up holes in the canopy, and allowing young trees to flourish.

Well, I saw ‘ole Queen Bee today. This is the first time I’ve seen her in her last 4-5 trips. We were always gone, or something else was going on, but did get to spend time with her today.

As much as I hate to say it, I had pretty much neglected my starter hive, but Sherry has been looking after it for us, and from what I saw with her, it is really doing well now.

Going back a little, Sherry began my starter hive, a few months back. She did this by “splitting” a few of her hives. This is where she has a few hives doing really well, with plenty of food source (honey), plenty of brood, eggs, and bees.

She’ll then take out a frame or two, full of bees, and replace it with a new frame. The frames she’s taken from her existing hives are now used to start other hives. At this point you can introduce a queen, or let the bees produce a new queen, which is the route we used in our starter.
The bees are able to produce a new queen, and do this by selecting a few cells, feed them a special food (royal jelly), and these will hatch as queens. This I believe is about a 21 day period.

I am very, very limited in my knowledge of bees, virtually no knowledge is probably the best description, so if I misquote, I’d welcome any of the beekeepers out there to “straighten me out!”

The new “virgin queen” then leaves the hive to find a drone congregation area to meet, have a few drinks, and mate with ten to twenty of these drones. At least that’s how I picture it in my mind as to these goings on! They sometimes travel as far as 10-15 miles in regards to their flights to mate.

They then return to the hive and begin egg-laying. At least that’s the plan. In my case the queen never returned! I told Sherry my dern queen, was evidently a floozie, and had stayed “laid up” with those ‘ole drones!

She told me….maybe. She said she could have died or been killed on the way back to the hive, but I prefer the floozie theory…honestly though, until Sherry mentioned it, I didn’t even consider something happening to the queen??

Regardless of why, the fact remains my queen done run off. So, the bees started over and made us a new queen, which did go off to mate, and returned. We now have a happy successful hive going on!

Checking the hive with Sherry, she pointed out the eggs, and larvae, and how well they’ve drawn most of the foundation off the frames and are now working them. I tell you, once you pop the lid and start looking at the frames in the hive you immediately realize one thing, it jumps out at you. Those are some busy suckers!

It was good to see the hive was doing well, and that Sherry had taken such good care of it. Sherry and her Mother are both good people, and now have a key to the gate, and they come and go as they want.

She was doing a little honey extraction from a few of her hives, and it shocked me just how much a full frame of honey weighs. Just looking at these frames you’d never think they hold as much honey as they do, but again it is considerable.

Sherry doesn’t wear a suit, most times, and just basically wades off out there in ‘em! She tells me some days they work easier than others, or one hive’s personality can vary considerably than say even the hive right next door. Watching and listening to her is very interesting.

I took a few pictures to share, and I really should have videoed her this trip, but Red is in Tampa for at least another week, and I can’t upload them from our computer…no high-speed internet…just satellite, so I thought I’d just wait until her return.

She’s given us a jar of orange blossom honey, and a jar of honey from the palmetto bloom, which was darker than the orange blossom. Both types of honey are very good, and the next will be from the cabbage palm bloom.

I got a little sneak preview of that honey from Sherry while checking her hives. She told me to stick my finger into a frame and taste the honey, and I did. This she said was from the cabbage palm. Honestly, I’m not so sure I didn’t like it the best of the three, although all three taste great.

Sherry is a very hard worker, but you can tell by watching and listening to her, that she really enjoys doing this. I believe her job is very rewarding to her in many more ways than just a paycheck. She’s blessed from that standpoint, because to do what you truly enjoy doing, and draw a paycheck from it as well, does it really get any better than that?

Well, I’ll share a few of the pictures with you guys, and hope you enjoy them!

Thanks for stopping by, and God Bless you and yours! Be sure to keep a smile on your face, and one in your heart!
Dub and Deb

My starter hive…now with a super 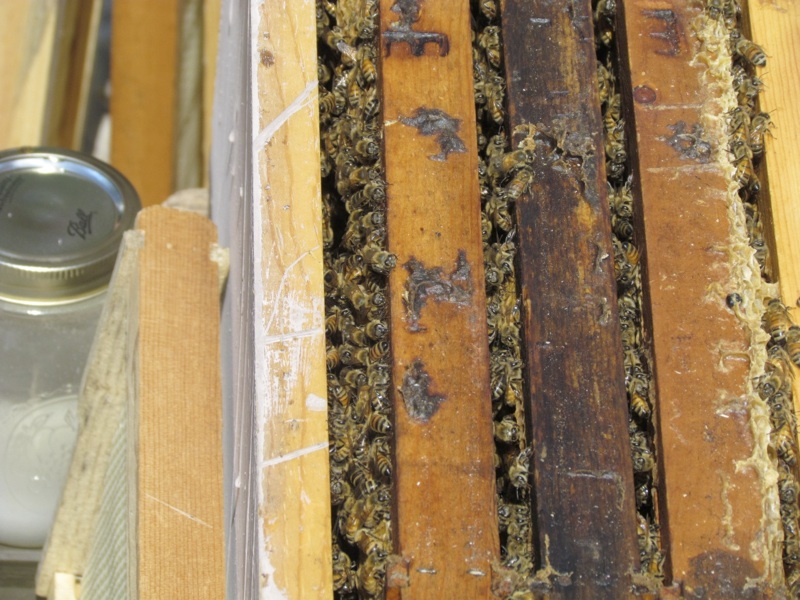 Looking into my brood chamber…getting some bees in there 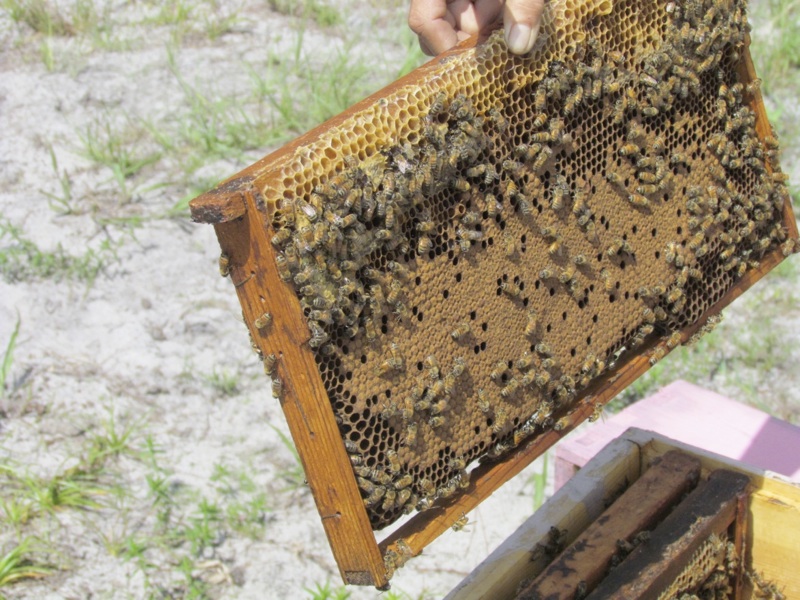 Frame from the brood chamber 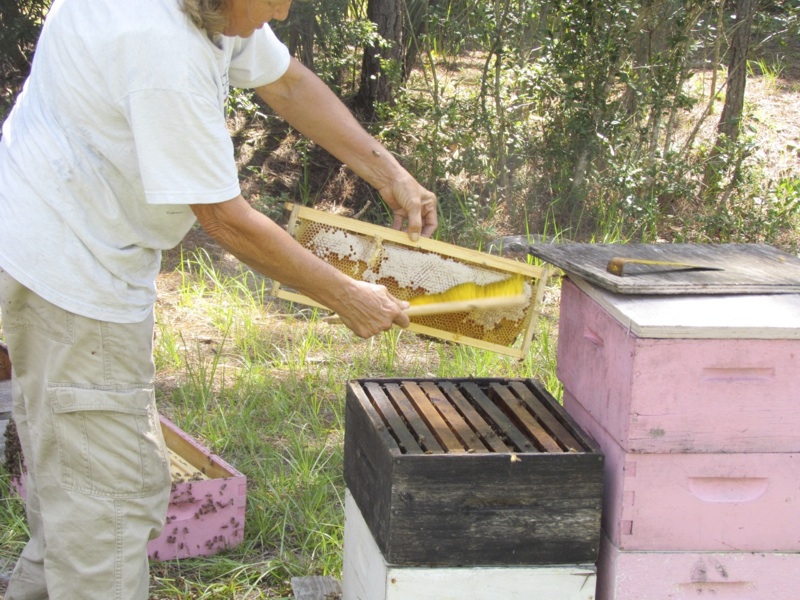 Sherry preparing to get some honey

Look at the honey 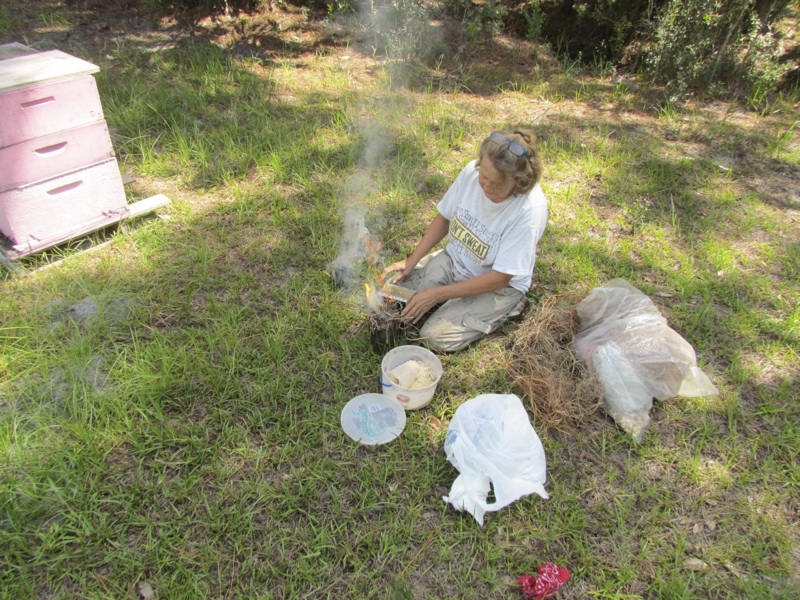 Sherry getting her smoke pot ready 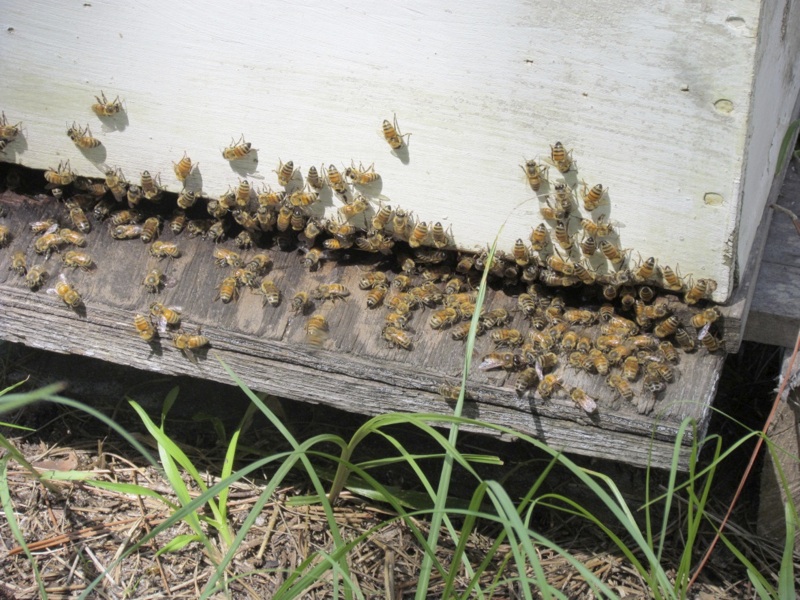 Coming and going via the front door

Bees trying to regroup at honey frames Sherry is taking to extract the honey. She takes a little soft brush and just sweeps them off. See a picture of this above.