The Garden’s Gone, But the Cows Sure Were Happy!

Good morning, and I hope all are well today! How about Father’s Day? Did you guys have a good one? Ours was great!

Well, our spring garden has done come and sprung! Honestly I can’t say that I’m very sad right at the moment, and I know Deb’s ready for a break. We have, picked, shelled, cooked for meals, and canned for later on down the road.

We’ve really had a dry spring this year, but all in all, the garden did excellent. It has supplied us, and our family with some really good eating, and we’ve put up enough that we should be able to eat butter beans, string beans, corn, and canned tomatoes, pickles, etc., probably until next year’s spring garden.

Now we can settle down, slow down, and coast for a while garden wise. Our rains still haven’t started, so we’ll not be putting anything else in the ground as yet. Isn’t it funny how each year is a little different?

Last year as an example, we didn’t make the first string bean, butter bean, and only a handful of tomatoes. The reason? Too much rain, I mean bucketfulls, and it drowned most everything in our spring garden.

We made a lot of corn last spring, and made some peas, but not a lot. Our fall garden made a slew of peas though.

Then this spring, we are dry as a bone, and have watered and watered, just to keep it alive.

To its credit though, the dern garden did pretty well! Again, it really supplied us with a bountiful harvest. On top of the drought, once we found out about Deb’s dilemma, we didn’t spend the time in it we really should have.

Off the top of my head, this year we’ve canned, I’m sure at least 50 quarts of ripe tomatoes, not counting the dozens we ate, 20 quarts of squash, of which 11 quarts were squash pickles. We also made 10 quarts of cucumber pickles. The squash and cucumber pickles were both bread and butter.

We put up 32 quart bags of creamed corn, and we still have quite a few whole ears frozen left from last year, so this gives us a nice mix for later on in the year.

Between the butter beans and string beans, we must have canned a total of both of probably at least 75 quarts, and have the last butterbeans we just shelled, still to cook and freeze.

Today Deb and I canned the last of our tomatoes pretty much. Our raised bed garden is still spitting out 4-5 tomatoes every 4 days or so, but they’re very small due to the Fusarium Wilt. There’s about 5 bushes that keep hanging on by a thread.

I’ve told you guys before that they were my “John Wayne Maters,” cause they’ve shown “True Grit!”

We’ve eaten eggplants galore, and countless banana, gypsy, and bell peppers. All but for the peppers, and a few tomatoes, this was grown in a 50’x100’ garden. So you see, it doesn’t take a lot of room to produce quite a bit of food.

If you live in a subdivision, you could convert part of your yard into a garden area, and grow many of your own vegetables. This helps in offsetting your food bill, plus the food you raise in your garden is superior taste wise, than anything you bring home from the supermarket!

Shoot, there are many people today converting a lot of, or all of their yards into garden areas. But honestly it doesn’t take a whole lot of space. Again, our entire garden is a 50’x100’, but look back once more at what it provided for us. Remember too, that this is only our spring garden.

What we’ll do next is wait on some rain to start, number one, but while we wait, we’ll till the garden area after we spread cow manure once again in it, plus, we have a pretty large compost pile we’ll distribute into it as well. At least as far as it will go.

We do have one end that is really still sandy, so this will be where the compost is concentrated. I can’t wait to see how this works out with our next crop. The next crop by the way, will be okra.

Mountain Gal Bonnie,” sent me some cowhorn okra seed, so I’m anxious to get that in the ground, and as far as the rest, I may go with I believe, Clemson Spineless, which is shown below. 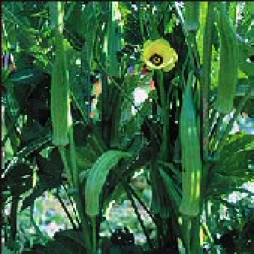 Again, we’ll do a little prep in the garden area first, then plant the okra after the rain starts.

Well, in regards to the cows they were tickled today. We first pulled the bean, eggplants, tomatoes, and squash plants up, shook the dirt off the roots, then stacked them in small piles all over the garden.

This does a few things for us. First…it feeds the cows, duh!

Secondly, by us pulling the plants up, it makes it much easier on my rototiller when we till the garden area again. No roots and stalks to deal with.

It also allows us to scatter the piles about, which keeps the dominant cows from pushing the more docile cows off, and allows them to eat too, and by scattering the piles all around, this means the cows will scatter manure over the garden for us. Free fertilize!

So, it’s a win-win, for us and the cows too. I gotta’ tell you, they were in the garden most of the day, on and off. They’d eat until the sun became too hot, find em a nice shady spot, cool it for a while, then go hit it again. Last I looked, they were just about done!

Now, about those green tomatoes we just canned. I’ve been watching those tomatoes the last three weeks, and the sun has been scalding them if you weren’t watching them closely. If you didn’t get them just as quick as they were starting to get ready, then you could forget it, they’d be ruined next time you went out.

We honestly were going to do some of Sandy’s Mother’s Tomato Pickles, but we’ve been so pressed for time anymore, we just couldn’t find the time. I’m sorry Sandy, and we’ve got your recipe, I PROMISE we’ll do some of these, they sound delicious!!

But, as I was wondering about what in the world to do with all these green tomatoes, because I knew as hot as it was they’d never all last, guess who comes to the rescue…one more time…Bonnie!

Take largemouth quart or pint mason jars, and slice your green tomatoes up, just as if you were going to fry them up. We used both sizes, and even a few small mouth, we just ran out of jars, and that’s all we had. We just used the smaller diameter tomatoes in the small mouth jars…

Have a pot of boiling water on a burner, then I use my pressure cooker pot as my water bath pot. Slice your tomatoes, and fill your jars. Fill them up with the hot water leaving a one inch headspace in the jar, out of your one pot, wipe the rim, and put them into your water bath, with the top of your jars I inch below the water. Boil for 8 minutes.

Take them out, and listen for the jar lid pop, or ping. You’re done, that’s it.

Her brother came for a visit with his wife, a couple weeks ago, and brought us a jar of green tomatoes Bonnie had put up. I asked Bonnie about them, and this is how she said to do them. She said they weren’t AS good as fresh, but shoot, this is a good way to save what you would have lost due to the extreme heat now anyway.

Plus, I bet these dern things are good after you drag ‘em in some cornmeal, and fry them things up, especially when there aren’t any green tomatoes around anywhere! I’ll show you below, just how much Deb and I feel they’ll be good! Check out the pictures!

Anyway, thank you guys for stopping back in to see us! We really appreciate you doing so. Ya’ll have a great day, and God bless!

As Deb says, “Keep a smile on your face, and one in your heart!” 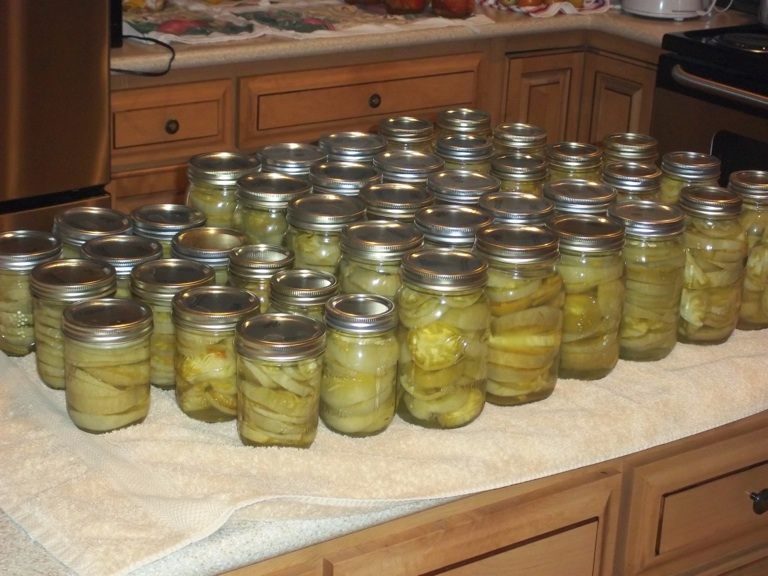 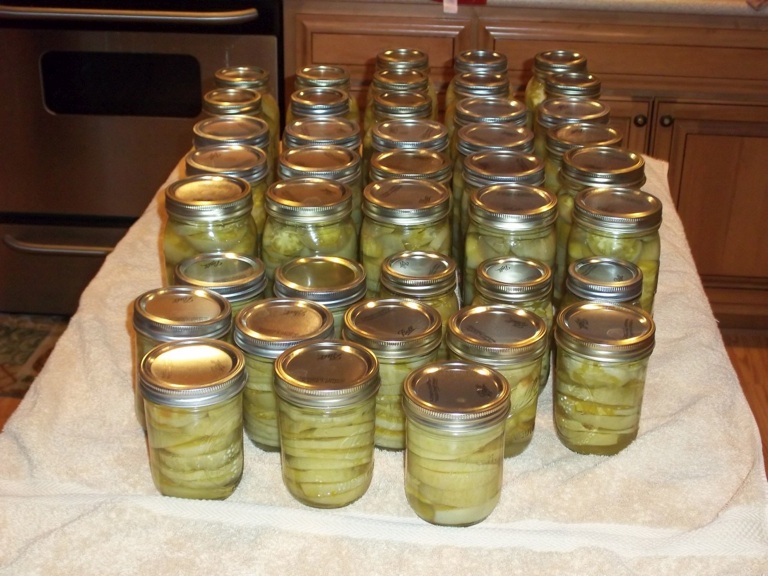 The Cows Working On the Garden 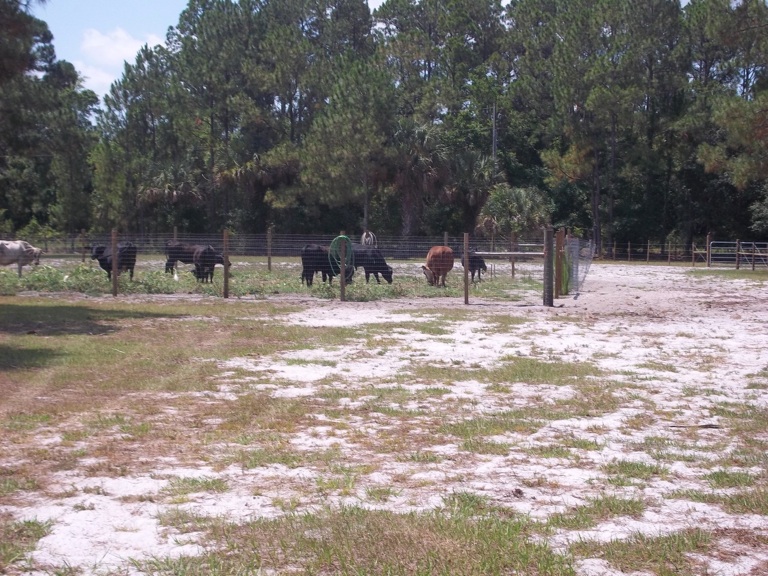 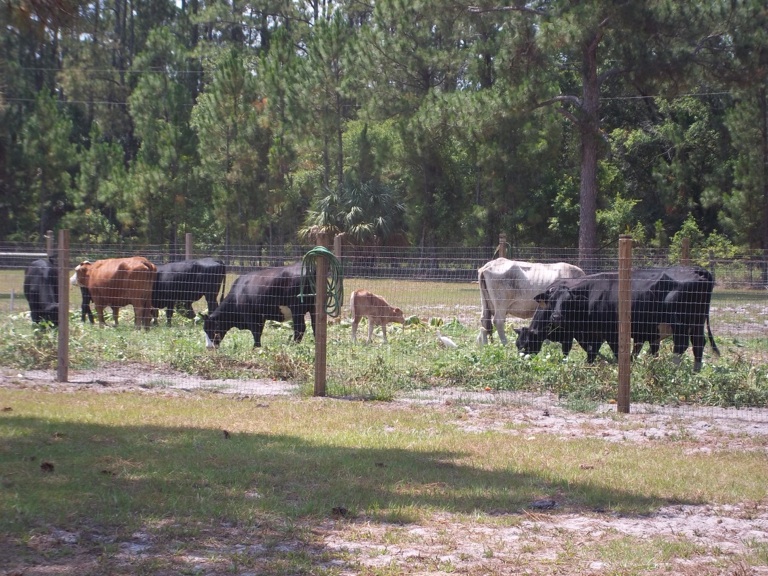 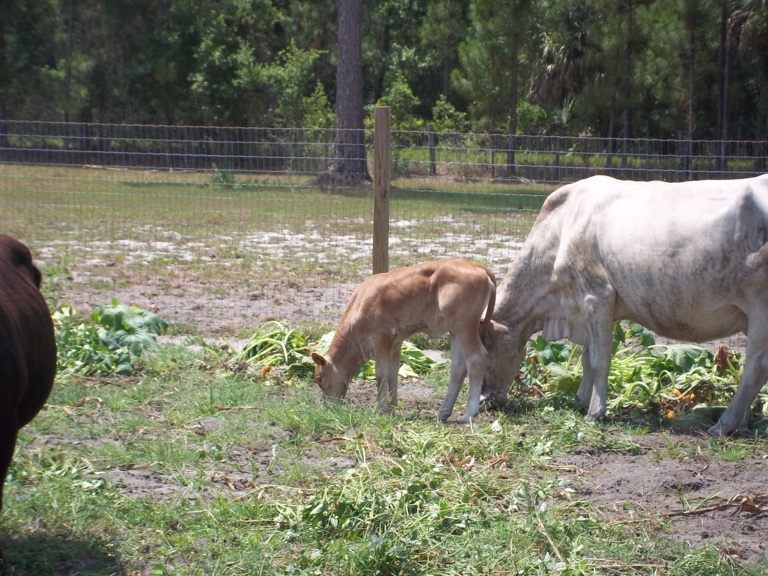 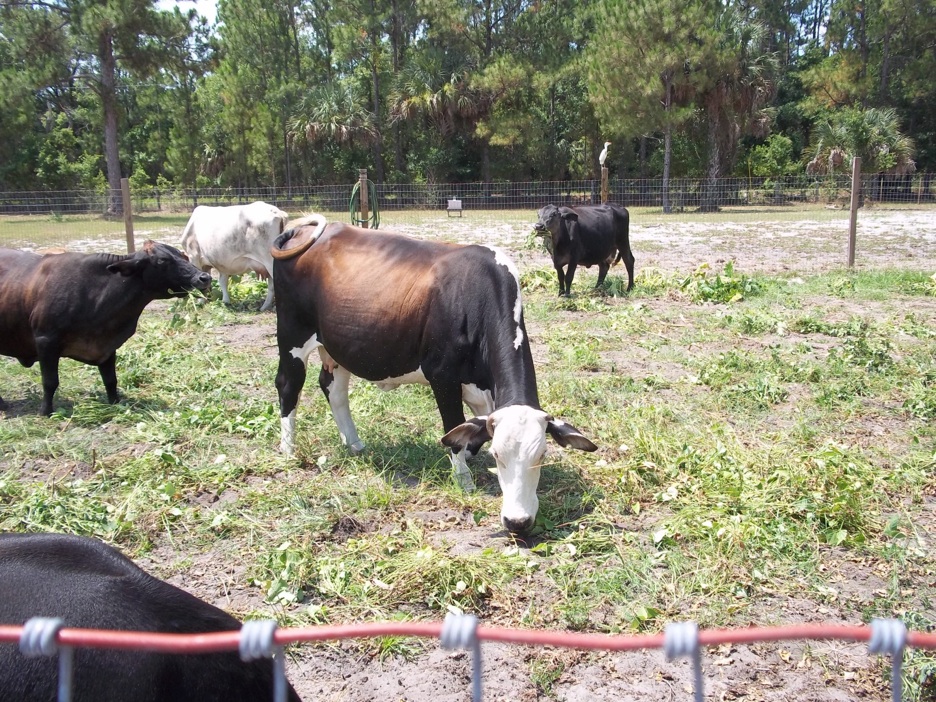 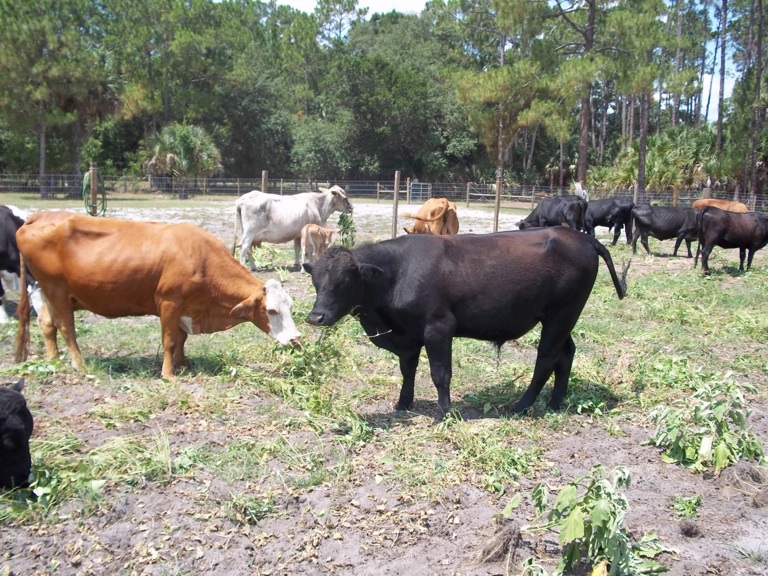