The Pressure Cooker Is Back

Good morning! The pressure cooker has re-emerged! After disappearing some months back, Deb and I heard a knock on the door this morning, opened it up, and there it stood…our pressure cooker!

The timing was amazing as we had squash, and string beans ready to can, and the tomatoes are going to be right behind!

After much hugging, and high fiving all around, we welcomed it back into our home, and I gotta tell ya’…the little feller hit the ground working.

All jokes aside, which Deb puts me up to by the way, we’re canning as I’m writing this. Actually, we have just taken the first 7 quarts of squash off the burner, and the pressure cooker is cooling down now. As soon as those come out we’ll put on our first 7 quarts of string beans.

Tomorrow we should have enough squash to add with what little we had left today, to at least put up another 7 quarts. As for the string beans, I’m guessing there are at least 14-21 quarts we’ll get from yesterday afternoon, and this morning’s pick.

Our cucumbers we should start pickling by mid to end of the week. The lima beans are just beginning to put on, and still have a ton of bloom on them. They’re still a little while off, but we have quite a few of those in the ground, and three different varieties.

The corn, though it has not done as well as I’d hoped, (and I’m sure has caused the good Lord to frown down upon me on account of my occasional outbursts in regards to it’s not doing so well), has begun to start producing ears. It will still produce a fairly good crop.

Deb’s peppers have all done extremely well, and I’m looking for her to start showing signs of a slight green tone in her skin in the next week or so. Dad-gum that woman loves a dern pepper! I’m not so sure she doesn’t cut those things up in her Cheerios, but I’m here to tell you, she enjoys them while they’re coming in. We’ll have to set her some more out a little later.

Our poor tomatoes that started off like a house on fire in the raised beds, have now all contracted the Fusarium Wilt. Well, all but about two.
Those things still produced quite a few tomatoes, and even though they seem to go through a slow and agonizing death, they still hang on long enough for the tomatoes to ripen on the vine. I call em my “John Wayne maters,” cause they’ve got True Grit!

I didn’t plant but 9 eggplants, and should be getting a few of those next week. Once again, I’m the only one in our household that eats them, so I figure 9 plants outta’ do me.

The way ole Deb has been juicing everything in sight around here lately, I’ll have to watch her in regards to those things.

Getting off the subject here quickly, we went to the Chemo Doctor today, probably can’t spell his formal title, but he is suggesting the removal of her breast, and then taking a look at the mass to determine his treatment. So we meet with the Surgeon tomorrow at 1:00 and set up the surgery for next week.

You guys have been so wonderful in regards to your prayers and support for us, and it is so greatly appreciated! We love all of you! Please keep those prayers coming for her, and I promise that you all are in ours as well!

Back to Deb and her juicing though. We have a juicer, and honestly, I kid you not, she is juicing us, about 22-24 different types of fruit and vegetable juice daily. I swear she is! We drink two 16 oz. cups apiece each every morning, and we dink one 16 oz. cup every afternoon!

This lady NEVER was a big vegetable eater. She now juices daily, and I’m sure I’ll miss something, but here goes:

EVERYDAY, three 16 oz. cups for her and I a day. Now she might run out of an item or two, maybe three, but we pick them up again in a day or two. 6 of the veggies we’re getting out of the garden, but this, is why I said earlier, I hope I can keep her out of my eggplant! But, I’ll share with her, IF she wants some.

Anyway, I just got the string beans going in the pressure cooker, and instead of 14-21 quarts, it looks as if it’ll be more like 21-28 quarts. We’ll probably stop at 21 though, and cook us a mess, and give Dale a good mess too.

I told Deb tonight that I think I’ll give them a good shot of fertilizer in the next day or two, and she looked at me like I was crazy.
Changing gears, I saw a comment on Word Press in regards to I’m guessing about my story about the wild man riding the grizzly bear, whipping him with a rattlesnake, or in other words…seeing Boogers!

Well, the comment is from my niece, who is my sister’s daughter Maddie. Maddie shared with us awhile back her smoothie recipe she’d left for my Mom, or her Nanny. She’d written it for Mom when she was 11.

Well, Maddie has struck again. After my Booger story, she decides she’ll share her North Carolina version, which is where Maddie lives. Here’s what she sent to us to share.

You HAVE GOT to watch this, NC’S finest right here. http://www.youtube.com/watch?v=qPfEqn8RTys

Sasquatch??? I believe if I was Sasquatch, I’d a run from that feller whether he had a stick in his hands or not! You better quit watching that kind of stuff Maddie, or you might wet the bed or something! LOL!

Thanks for reading Matt-Matt, and commenting too! I’ll send your twenty bucks to you tomorrow, okay? You got to comment twice a week though, but change your name around some, that way everybody doesn’t know it’s you commenting every time!!

Well, we’re going to go for now, and open back up tomorrow. Same time, same place! Thank you all so much for coming!

I’ll throw up a few pictures of what we picked out of the garden last evening and this morning, and some of the canning. The tomatoes all came from the plants with the Fusarium Wilt, or my “John Wayne Maters!” See how small some are.

The recipes today will be how to can string beans and squash for those who don’t already know! Thanks again guys! 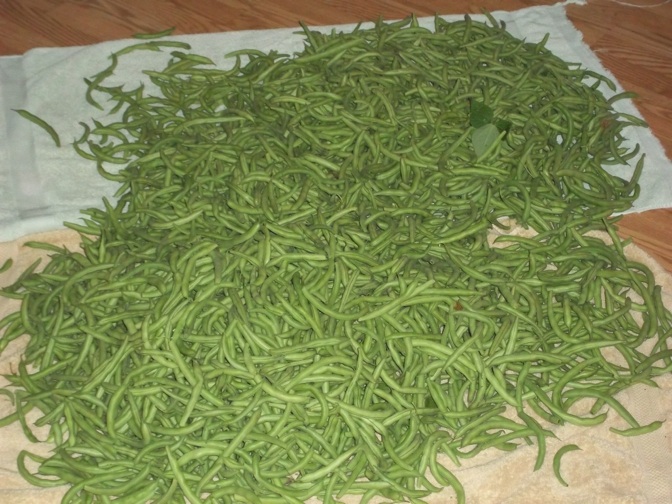 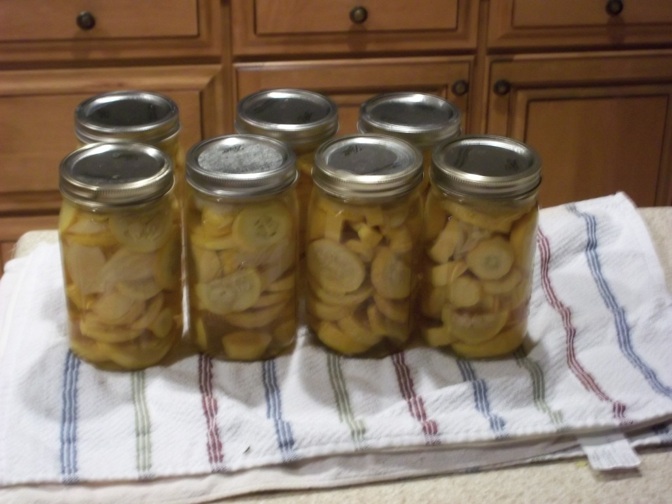 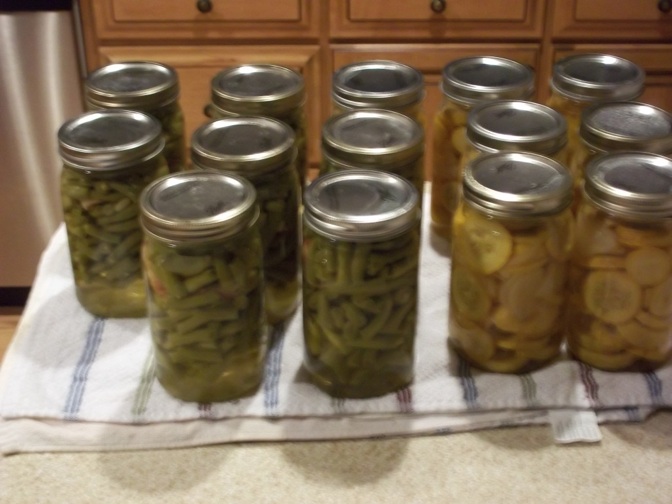 This entry was posted in Covering the Bases. Bookmark the permalink.

4 Responses to The Pressure Cooker Is Back