Fusarium Wilt in My Tomatoes?

Good morning my friends. How is everyone this morning? We hope all are fine and ready to get started this morning.

I’ve got a problem, and you are all probably asking, “What else is new, aren’t ya?” Well, as you know we’ve had our gardens here in central Florida planted now for the last several weeks. We’ve been getting banana peppers, some gypsy peppers, a bell pepper or two, and the cukes are fixing to start rolling in as well.

Our tomatoes are just loaded, and we ought to have some of them ripening just any day now. I’ve said this before but I can’t emphasize enough how badly I want that first of the year…tomato sandwich! I love them darn things.

Bonnie commented the other day she likes her fried green tomatoes, and starts with them first. I like to get a few ripe ones first, then turn into some green tomatoes, after having some ripe ones. She says…it’s a difference of opinion, and I have to agree.

Well, after the last few days, it looks as if I may in fact be eating some green ones fried first!

About a week ago, I went out to the raised beds, as those mothers are going to be giving me some tomatoes first, as they were planted two to three weeks prior to the garden tomatoes.

Well, I get to looking, and there’s a plant wilting, and then another. It looks JUST like a lack of water wilt, but it’s not. We water those jewels about once a week, and when I first noticed it, was about a week after the last watering, so…I watered them and told Deb, we need to watch a little closer, there were two plants in a wilt…

The next day, the same thing, but even more of the plant was in a wilt. We both knew then that we had some type of bug for sure, but probably some type of disease.

So, now I’m beginning to wonder at this point, if there’ll even be a dern tomato sandwich, at least in the next week or so anyway! If we lose the plants, those three infected at the least, then I’ll have some fried, like it or not.

So, here’s my question. There’s really NO yellowing in the first stages of this, and very little through the cycle.

None have died, and amazingly, there is still SOME, though not much, good growth on these plants?? Also this is not something that gets into the plant and boom, it’s done with, but actually it tries to make a comeback?? I don’t understand.

From what I’ve read, I believe this to be Fusarium Wilt. 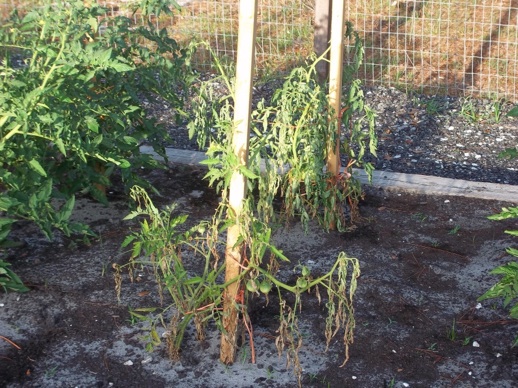 Well, that’s what this is doing to the tomatoes. If you have any suggestions, please advise. This is baffling me, but I believe it to be either Fusarium Wilt, or Verticillium Wilt. We’ll discuss both.

Both are a soil-borne fungus that may persist in the soil for years. So, they claim crop rotation, and resistant varieties to these strains of wilt in your vegetable selection will help.

I wonder though, if after harvest you could till the soil heavily, turning the bottom dirt to the sun on occasion and bleaching it, and then by treating the soil with a type of fungicide, if you could resolve the problem.

The reason I ask this, is that this wilt is showing up in our raised bed garden. This was topsoil that was trucked in to our place and used to fill the beds. So evidently we brought this soil-borne fungus in, and it wasn’t in our native soil. Leave it to Dub, and his BRIGHT ideas!

The variety of tomatoes in our raised bed is Better Boys.

In the Fusarium strain, wilting can appear at the top of the plant first and this was the case in our tomatoes. This is why I thought it to be just a dry, needing water wilt, as the wilt was in the top, in the pushing new growth. They claim this may continue until the plant dies, but this is not always the case.

So, I’m just guessing, but I don’t think it spreads from plant to plant, just starts from the soil. But, they do say to destroy infected plants after harvest. Don’t worry, I fully intend to!

The plants may recover, but even if they do the plant will never be what it should be, and the fruit will be small and of low quality.

They also claim that in many cases a single shoot, or a single side of the plant may wilt first. Again the top of our plants started the wilt first, and one of them did have the single side wilt happen, as well as the top wilt.

The Fusarium Wilt is caused by not just one but several different types of the fungus, Fusarium oxysporum. This wilt will also get into potatoes, peppers and eggplants.

And, further reading answered part of my question about ridding the soil of this fungus, as Ohio State University says soil fumigation will work. I’d thought about this as well, because I remember back working in the orange groves, 30 years ago or better, we used to fumigate all our new tree beds, before planting the resets.

It was a small can of some type of gas, about the size of a coke can. It was mounted onto a stem tube which was run into the ground. The can set on top of the tube in a holder which held the can in place. You latched the tube into its holder, and a hole was punched into the bottom of the can, and the gas released down the tube, into the soil. This was done to kill citrus nematodes.

Both can be controlled somewhat, but not cured by spraying with copper or sulfur. There is a fungicide, Serenade that can be used. I may contact Robbie, who takes care of a good friend’s orange grove and see if he can get me a couple quarts to have on hand.

The Verticillium Wilt is similar to the Fusarium Wilt, but it causes the bottom leaves of the plant to become pale and forms V-shaped lesions, which we haven’t noticed on our plants. The plants infected by this also may survive the season, but with the same results. Stunted plants, decreased yield, and small fruit.

One thing I’ve noticed, and it’s only on two tomato plants in the garden, is what looks like, Septoria Leafspot.

This is tiny areas on the leaves, all at the very bottom of these two plants, and these have dark spots on them. They say this shows up on the older leaves first, which I’m assuming is why it is showing up along the very bottom leaves. There is yellowing of the leaves as well.

I will be getting some type of fungicide today without a doubt.

I’ll keep you guys informed. If any of you have experienced any of this, or know of any help you may can offer, please step up, and let us know!
Thank you all once again for coming, and God Bless.

This entry was posted in Home Gardens. Bookmark the permalink.

3 Responses to Fusarium Wilt in My Tomatoes?