Weekend in the Garden

Good morning ladies and gentlemen. I usually say guys, but this morning I thought I’d let you know that by my saying guys…I still mean members of both sex. I can say that, right?

Anyway, we’re glad you GUYS stopped back in to see us this morning in Ridin’ Out the Recession! Thanks for coming!

Weekend in the Garden

Well, the week is gone again and Saturday is here for sure. Dale’s coming in this morning, and we’ll be doing a little work in the garden today.

We’ve got tomatoes to tie once more, trim up the eggplants, and cabbage, and got some dern ole weeds sticking their heads up again. By Sunday, they’ll be gone. I’ve got a scuffle hoe I’m going to put to good use in the raised bed garden.

There’s hardly any weeds at all in it, as Deb keeps pulling them just about as quick as she see them. I scuffle hoe it every so often to bust up the dirt and aerate the soil. Afterwards, I’ll give them a shot of granular fertilize. This will be the first time for these plants. I’ve given the garden a shot a week or so ago.

The garden is finally beginning to catch ahold now, and everything’s looking good. The string beans are busting out with little blooms all over them. The fordhook limas are just beginning to show signs of some bloom as well, at least the ones that came up with the first planting. Those are the beans that kept hanging up in the seeder drop tube, and we ended up resetting.

I set my beehive about 30 yards away, so the bees can visit it among everything else they forage for this time of year. I’m proud as a pig in slop over that hive Sherry gave me, and can’t wait for those two to get back.

After we get the garden squared back away, I’m gonna dust the plants with Sevin. This has always worked well for us, and surprisingly, the bugs haven’t been a problem at all so far this spring. We’ve just noticed something eating on the cabbage leaves, but this has just started, so before it becomes an issue, why we’ll just go ahead and nip it in the bud.

Man, we are dry. We are really beginning to need some rainfall in the worst way. But here in this part of Florida, we’re normally dry up until June. But, Red will be starting a big sealcoating job May 2nd, and that needs a 24-hour dry time.

Normally when we start spraying sealcoat on a large job, that’s better than the old time rainmaker beatin’ on his dern drum and shooting rockets up in the air trying to make it rain. We turn on our pumps to sealcoat…voila, instant rain!

So we won’t be making any money, but oh how the garden will be growing! One of those, when life deals you lemons, you make lemonade type of things! The problem with this though, is none of my bankers eat lemons…they seem to prefer those “cash crops,” if you get my drift!

Anyway, besides it being dry, the weather has been gorgeous here. We spoke with Judi and Brian today and I told her how hot it was, 90 degrees, and she said there it was in the forties there…maybe. At night she said they were still hovering around zero!

Man, that seems awful cold to me and it being almost May. But on the other hand 90 and above seem awful hot to me for not even being May yet!

I know what I wanted to ask you guys today. IF, I take our grass cuttings when we mow, can I put these down in between the rows in our garden, spread it out on top of the ground, and by doing this add some much needed nitrogen to the soil?

Will it work, or will it be just basically a mulch that keeps the weeds down? We’ve been bagging them since we started mowing this spring, but we’ve been putting them into our compost pile, and keep turning them in.

Would you keep composting them, or lay them in between the garden rows. I’m asking your advice on this, which would be the most beneficial?

Now, Kunoichi, Sandra, Bonnie, and even Kathleen…you guys should see where I’m going with this. MY DAD-GUM CORN! I’m thinking if I could lay this out between the corn rows, would they pick up some much needed nitrogen, maybe?

I did get one bee video loaded today off our slow internet. I called Red, and asked if he thought I could load one off of our internet provider, instead of waiting for him to get home, which is now looking like Tuesday.

He tells me yeah, if you jiggle your mouse some and not let your screen saver pop up…just jiggle the mouse.

Well, I thought alright, I think the videos are pretty neat, and it’s too hot to do anything else, I’ll load one and see what’s involved. So I started the upload.

This video you guys are going to watch here today, ALL 3 MINUTES and 7 SECONDS of it, took me 1 and a half hours to load, I swear to you guys, 1 hour and a half!! Ole Red wasn’t kidding on “just jiggle the mouse for a while,” and I bet that son of ours has laughed all afternoon, just visualizing me jiggling that dern mouse!! I’ll get him back!!

Anyway, here it is!

You guys have a great day today! Most of all I wish everyone a great Easter, and God Bless you and all your family!
Dub and Deb

A few pictures of the garden. 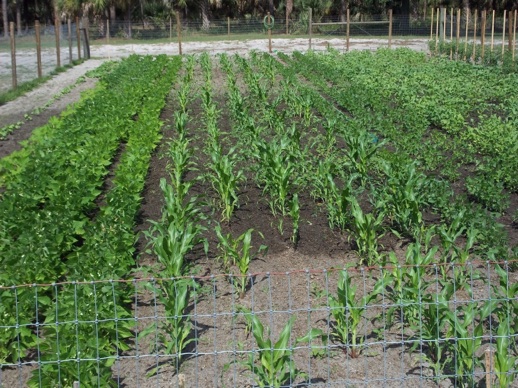 One Response to Weekend in the Garden