Well, hello and welcome back to Ridin’ Out the Recession, in Miz Judi’s Kitchen. Here in Florida today, you just couldn’t ask for any prettier weather! It’s absolutely beautiful, but we could stand us a little rain.

Sadly though, we’re in our dry season, and usually we don’t stand a real good chance until June, when our rainy season begins. We’ll catch a shower every once in a while, but last year was kinda’ an odd year rainfall wise. It started early, and continued on, but again that’s unusual!

This morning we’ll talk about a couple things, first our daughter Michelle and yellow jaundice, and the second, being our compost pile. Let’s go ahead and get started.

Well, you guys that read us pretty regularly, know that Michelle is my, our, oldest daughter, born to my first wife and I.

Michelle is, and always has been a dern sport model! She has two boys, Garret and Clay, who we all just call, “Willie.” She’s VERY outspoken, VERY independent, and also Very humorous.

She loves the outdoors, and would rather hunt than most anything else. Everybody claims, she should have been a boy, and through her temperament, and love of the outdoors and everything in it…well, it is a valid point at times!

Anyway, Michelle and her sister Kara lived in Apopka. Deb and I lived in Live Oak. They’d come up to visit with us and stay a week or so. This one particular time they came, I guess Michelle was around 13, with everyone else dropping off from there.

Michelle was always the tough one in regards to her and Kara, and with Kara being the younger, Michelle just kinda’ looked after her while they were growing up. You know the script…you mess with Kara, you’re messing with Michelle too.

Well, that’s the setup this morning to my little tale, if their Momma wasn’t around, then Michelle just stepped up, and became Kara’s Momma, and really didn’t care what Kara thought of the situation!

I always was of the belief the kids needed to eat a balanced meal, and this included veggies. You didn’t have to put many on your plate, but enough to warrant that, I did try them. A lot of times kids will tell you, I don’t like that, but once they do try it, they find out, you know what, that’s really not bad after all.

The times I’m speaking of now were tough, real tough, and money was a luxury. We had enough to get by, and keep us all fed, and clothed, but hardly was there any extra at all. So, food was to be eaten, and not to be wasted.

That being said, Michelle and Kara were up visiting, and this one particular night we were all at the table eating supper. Well everybody was excited about them visiting, so the buzz was considerably more than usual while eating.

We had, shoot, I don’t remember the whole course Deb had laid out for us, but I do remember vividly squash was a part of it.

We’d been eating supper, and Deb and I had finished, and walked outside to sit for a while. The kids were still eating, and talking a hundred miles an hour, because they didn’t see each other very often. We’d decided to let them jabber on and finish eating.

Well, they finished up, and started drifting outside…all but Michelle.

Deb walked in a little later to check on Michelle, and hollered out, “Dub…I think Michelle has yellow jaundice.” I didn’t know what yellow jaundice was, but assumed by the name, it had something to do with a person yellowing up for some reason.

I went inside and there was Michelle, sitting on the couch looking like she’d probably felt better before! We asked her what was wrong and she told us what was up.

The kids didn’t particularly like squash. Kara wouldn’t eat it evidently. Well, “Momma Michelle,” in the performance of her duty to protect and look after baby sister, had told Kara to slip her, her squash, and she’d eat it for her. Worked out fine, plates clean.

What Michelle hadn’t realized was that Josh and Red, by seeing this strategy by Michelle and Kara, simply weren’t gonna’ let that go by without something being it for them too! Those two then demanded Michelle eat their squash as well!

Michelle told em where to get off, but the two boys fired back, that if she didn’t eat their squash, they’d tell me. After considering this for all of about a couple seconds, Michelle went to eating theirs too. So the girl had eaten her complete meal, and 3 other helpings of squash, and was sitting in there about to bust a gut!

We got her outside and moving around some, and she felt better almost instantly, although I don’t think she was none too happy with Josh and Red…for awhile!

Now honestly, we didn’t really think she had yellow jaundice, but we went to teasing her about it instantly, and still do today. We have all had a good laugh over that episode many times, and I’m sure we’ll have many more…at Michelle’s expense.

By the way, believe it or not, Michelle absolutely loves squash to this day. As far as the other three go, they try to stay as far away from squash as they can get…never liked it!

Here’s for you guys a few pictures of our compost pile.

We started with newspaper, then grass clippings, then hay, then cow manure, then oak leaves, and finally topsoil. We repeated these steps twice so there’s, two layers of each item, about 4” thick, all but the newspapers. We know we need more greens, but as the grass is fixing to kick into its growing season full time, we’ll continue to add these to the pile. Plus all of our kitchen waste.

How often should we stir this pile? I’m figuring on twice a week, will this be sufficient?

Also, with us living in Central Fla. how often would you hose the compost heap in regards to keeping it damp? I’m under the impression it can be watered too often, but in considering where we placed it, it will have morning sun, and afternoon sun until about 3:00 pm. So by not being in full sun all day, this should cut back on watering the pile, is this correct? 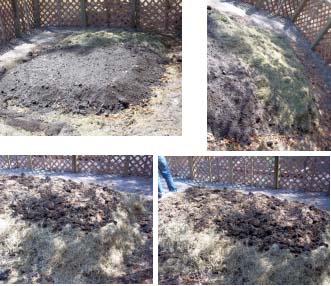 If you remember we planted a few raised bed gardens. Here’s a picture of our tomato plants. 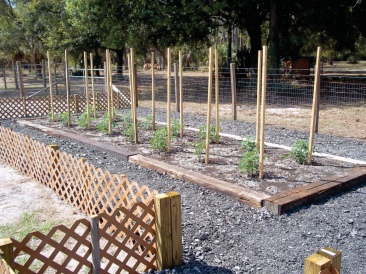 Thank you guys for coming, and get outside as much as possible. The weather is just fine!