Good morning, and thanks for stopping back by to visit with Deb and I. We appreciate you doin so.

So far, so good with the garden. After getting off to a flying start this year by immediately killing about 50 +plants, we’re going along pretty good now.

If you didn’t know, well, we’d put up a greenhouse, and started most of our plants from seed. We wanted to use all heirloom varieties mainly on account of Deb’s juicing, or, our juicing. By doing so we’d have no genetically altered seeds, but in essence, basically the food God provided for us, and in Deb’s regard we felt this vital.

Quickly, while going through a Sports Illustrated” the other day, I read something that floored me, really. There was a little write up on cancer, and it claimed that in the US, 1 out of every 2 men would contract cancer in their lifetime. ONE out of every TWO! Half!

I found that just incredible?? What’s up with that?

In women’s regard…1 out of every 3. Still, 33% of women in the US today will contract cancer. Why is becoming so rampant? Is this our diets? Is it from most produce today being genetically altered? Is it what is being applied to the crops for insect control?

How about our poultry? You guys taken a look at the size of chickens lately? Hard to find a small fryer these days, or have you noticed? Is this from growth hormones? I don’t know, but I am asking…help me out somebody.

Anyway, as a whole, we’re just trying to eat a little healthier, but I did find those numbers literally staggering!

Back to my killing our first plants…we didn’t have any idea that if you’d started them from seed in a greenhouse, you had to harden them up prior to setting them in the garden in full sun. This is just setting them out in the sun for a few hours a day until they harden, or toughen up to the elements, for about a week. Once that’s done, everything works out great!

By my not knowing this, I set that first bunch straight out of the greenhouse into the garden, and killed the dern things…graveyard dead!

We have been prepping our garden out front the last couple days, and we’re pretty much ready to get started setting out some plants there now as well.

I tilled it in yesterday, both directions, and man, the soil is really looking pretty good. We’re anxious to see how it grows things off this year. We’d added cow manure and leaves over the entire garden area a couple, three months back. We let it set for about 3 weeks then tilled it in.

We then put out more oak leaves over the entire area again, and after building our grow areas around the greenhouse we put about ¾ of a semi load of compost we had leftover in it as well. This and the leaves are what I tilled in yesterday. Honestly, it’s starting to look pretty rich now.

We’ll be planting tomatoes, peppers, and okra for sure, but probably a couple other things too. We almost decided on peas too, but backed off that. We do so well with planting our peas in August, we’ll just keep planting them then!

We’ll also run irrigation to it after planting. The irrigation around the grow areas beside, and in the greenhouse, has just absolutely RUINED me. No more hose draggin if I can help it! LOL!

I’ll share some pictures of how the greenhouse is coming along, and the grow areas too. The vegetables in both are now really taking off! Everything outside when we set the plants in their hole, we added ½ teaspoon bone meal, and then filled the hole up with Jungle Growth garden soil.

Evidently it was just what the doctor ordered getting the plants started off, as again, everything looks good!

I went out earlier to check things out, plus we’d had a pretty good couple of showers, and good night, it doesn’t matter how much water you put to your plants…NOTHING works as well as rainwater! It all just looked…so alive, after the showers!

Anyway, how bout a laugh before we take a look at the garden? This comes from my sister-in-law Patricia, but just plain ole Patty to us!

A man and his wife were awakened at 3:00 am by a loud pounding on the door.

The man gets up and goes to the door where a drunken stranger, standing in the pouring rain, is asking for a push.

He slams the door and returns to bed.

“Who was that?” asked his wife.

“Just some drunk guy asking for a push,” he answers.

“Well, you have a short memory,” says his wife. “Can’t you remember about three months ago when we

broke down, and those two guys helped us? I think you should help him, and you should be ashamed of

yourself!” “God loves drunk people too you know.”

The man does as he is told, gets dressed, and goes out into the pounding rain.

He calls out into the dark, “Hello, are you still there?”

“Yes,” comes back the answer.

“Do you still need a push?” calls out the husband.

“Yes, please!” comes the reply from the dark.

“Where are you?” asks the husband.

“Over here on the swing,” replied the drunk.

Here’s our watermelons on the right, our squash in the center, and eggplants on the left. 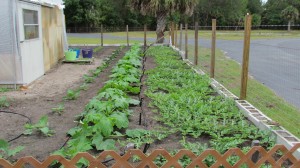 Cucumbers on the right, onions to the left, squash further left, and sweet peppers on the far left. Many of the onions we grew from seed. 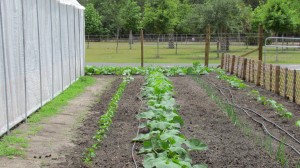 Our tomatoes. Some are now on their third tie. 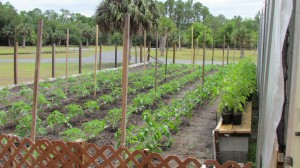 Red-seeded Simpson on the bottom left, iceberg in the center, and Romaine up top. Okra top right, beets scattered through it, and sweet peppers. 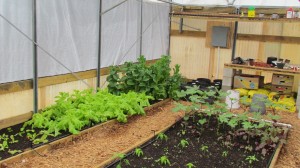 Japanese cucumbers…headed into the rafters.

The volunteer tomatoes headed into the rafters as well. 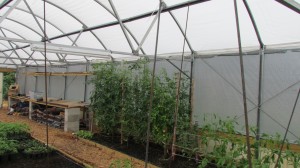 Another view of the tomatoes in the grow area. 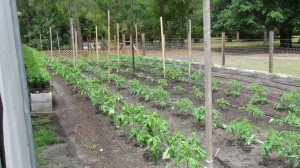 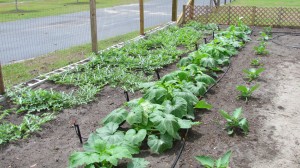 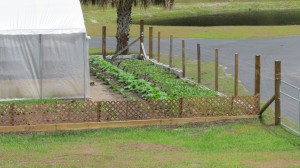 We hope you guys enjoyed the pictures! Take care and God Bless! Deb says to keep a smile on your face, and one in your heart!

4 Responses to Garden Update and God Loves Drunks Too…