Getting the Garden Ready, and Some Decisions Made on the Greenhouse

Good morning guys, and welcome back! C’mon in, grab a chair and let’s shoot the bull for a while!

Man, it’s been windy here the last couple days, and it’s sure dryin things out…in a hurry! We’ve got a 30% chance of rain today, but maybe we’ll catch some. We could use it, but it doesn’t look promising.

Our garden finally got the last bit of cow manure yesterday. While Corey and Elmo were haulin poop (they tell me they sure take a lot of crap off this job), I was grindin oak leaves and getting them in piles to spread over the manure. We’ll then spread 2 to 3 bales of hay over this, and then till it all into the existing soil.

I’ve got until Feb. 8th, to have our broccoli and cabbage set out again, the first sets were JUST beginning to produce and BAM, 24 degrees one night, followed by a 27 the following night. Knocked those suckers for a loop, so we gave em to the cows.

We’ll now replant them, probably a row of each, then we’ll split a row of cauliflower and lettuce. Our rows are hundred footers. We have to have the lettuce and cauliflower in by the 7th. We always plant by the almanac, and these dates are moon favorable.

Then we’ll set potatoes, and our planting slot for them, is between the 10th, and the 20th. We’ll put in a row of onions, and they’re planted the same time as the potatoes. Again, these are the moon favorable dates. That’ll give us a good start in our “kinda spring garden.”

Gonna have to tune-up my weedin and pickin machine. It’s a two-in-one combo, and it’s “set-up” all winter. So I’ll have to get her out and run her some the next week or so…blow the cobwebs out, you know. The dern thing’s about 50 years old, maybe a little older, but I’ve never seen a brand name on it?? It does have the initials, D.E.B., though! LOL!

These first three pictures of the manure we’ve been putting on the garden. The fourth is a pile of oak leaves we ground up with the little mower, and we got piles scattered all over the dern place! We’ll put these in a thin layer over the manure. This will be followed by a thin layer of hay, then as I explained earlier, we’ll till this into the existing soil. 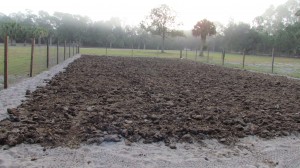 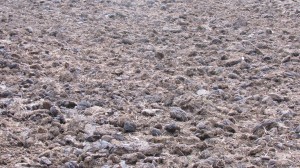 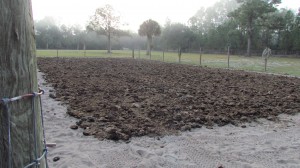 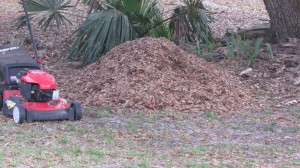 Now our greenhouse is still a work in progress, and we should have the outside all buttoned up by weeks end. We can start the beds anytime, it’s just workin them in, and we have been busy around here the last month or so.

What we’ve kinda got in our minds is to have four, three foot wide beds, with two foot walkways between each bed. The greenhouse is 18 feet wide by 60 feet in length. So this will work out as having 2 of the beds 50 feet long, and 2 beds 40 feet long. You can get a lot of veggies growin in that “mutha!”

Our intent is to dig out, and remove the existing soil of each bed to a depth of 12 to 14 inches. We’ll then fill the beds back in with good potting soil, mixed with peat. We’ll then use fiberglass panels like on the outside walls of the greenhouse, cut in 8-10 inch strips, and use these as the perimeter walls for the raised beds, or trenched beds.

By doin this, we’re HOPING that using rebar as braces for the fiberglass, and stakes every so often that we can screw through the fiberglass and lock them into place onto the stakes will to help strengthen them. We’ll soon see.

We’re also hopin that by usin the fiberglass panels as our retaining wall, it’ll last a LONG time too, plus be cost effective. If this works out, we’ll have the really good soil mix to a depth of around 18 to 20 inches. This would be plenty.

I’m goin to share a video of our good friend Bobby. You guys have seen Bobby’s video’s on here before, but this one shows kinda what we’ll be doin, as far as the beds bein built, in our greenhouse. The only difference I see is that our beds will all be 3 feet wide, and 40 to 50 feet long.

This could change though as Deb and I are fixing to be in our, “trial and error stage, but we’ll eventually get it figured out where…”it works for us!”

The first picture below is the inside of our greenhouse. This was taken for you to envision the four three foot beds we’ll have in it. Again, there’ll be a two foot walkway between each bed.

The next two pictures are of the volunteer tomato plants that volunteered out of our compost pile. Deb and I add our daily juice pulp from our juicing to the pile. Well, we were surprised to see that these guys germinated, so we planted them. They’ll be goin in the greenhouse as juice tomatoes…and I might just have to taste sample those boogers!

They are out of hybrid plants, Big Boy’s and Better Boys, so I’m not sure what type of characteristics these will have, how they’ll produce, or taste, BUT…they’re tomatoes!

The last two pictures are of a white eggplant, and a cherry tomato ole Cuz gave us. Cuz bein one in the same that catered our food for Deb’s party a while back. 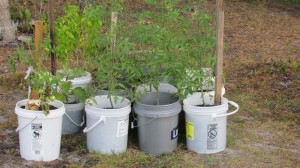 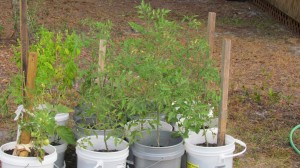 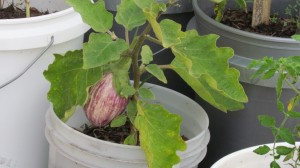 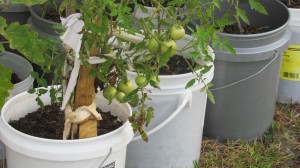 Take a look at Bobby’s new greenhouse and its setup.

Boy…doesn’t that look nice? Bobby’s a dern “workin Trojan,” and we feel very fortunate to have him as “our friend.” Great guy, great Christian, and great family man…and a great gardener! To me, Bobby is…da man! Thanks for all your input my friend!

Here’s another video from a friend of ours out in Texas, ole Tim. Tim’s just showing everybody an update on his seedlings, his chickens, and what he has in his garden still, plus what he’ll be doin a little later.

Doesn’t Tim sound like a great guy? Deb and I really like watchin Tim’s videos, and you can just tell by his voice that he really enjoys getting outside and workin his garden.

Deb and I got a kick out of his chickens names, especially ole Red. We both looked at each other and declared, “Dern, Tim’s named a chicken after our youngest son… “ole Red!” LOL!!

Anyway guys, for those who don’t garden, or for some reason don’t anymore, shoot, get ya some seeds and put them in the ground. It is a lot of fun, and the rewards of watchin those little guys pop outta the ground, start growin off, and then producing…man, Deb and I just enjoy the fire out of it!

On top of that, good night a livin, the fresh vegetables you’re supplied with are just SOOOO good! You can’t even begin to compare YOUR fresh vegetables with store bought. And for those of you with children still at home, plant NOW while you still have “forced Labor!!” LOL!!

No seriously, you guys might just be amazed at how those little guys and gals take to it! I know Shelby Lynn would rather be out in the garden piddlin around with her Nana and Poppa, than eat! That little girl just loves to be out in the garden, but actually outside doin anything rather than bein cooped up inside jackin with a dern video game!

She’s got ole Deb and I right where she wants us…wrapped around that little finger of hers! The good Lord knew what he was doin when he blessed us all with grandchildren, did he not? Plus, as I’ve said a dozen times before, our grandchildren and us both have the same common enemy…their parents and our children!! LOL!

Now, before we close for the day, let’s hear from our good friend Roger once more. Bein as Deb and I, plus so many other of you guys are from the South, we understand that our Northern, but in reality “Yankee friends,” enjoy pickin at us…bein rednecks.

Many times they feel it is a “cut,” but in reality we enjoy bein hung with the handle, redneck. Here’s one such example…LOL!!

His name was Bubba…He was from Mississippi, and he needed a loan, so…….he walked into a bank in New York City and asked for the loan officer. He told the loan officer that he was going to Paris for an International Redneck festival for two weeks and needed to borrow $5,000 and that he was not a depositor of the bank.

The bank officer told him that the bank would need some form of security for the loan, so the Redneck handed over the keys to a new Ferrari. The car was parked on the street in front of the bank. The Redneck produced the title and everything checked out. The loan officer agreed to hold the car as collateral for the loan and apologized for having to charge 12% interest.

Later, the bank’s president and its officers all enjoyed a good laugh at the Redneck from the south for using a $250,000 Ferrari as collateral for a $5,000 loan. An employee of the bank then drove the Ferrari into the bank’s private underground garage and parked it.

Two weeks later, the Redneck returned, repaid the $5,000 and the interest of $23.07. The loan officer said, “Sir, we are very happy to have had your business, and this transaction has worked out very nicely, but we are a little puzzled. While you were away, we checked you out on Dunn & Bradstreet and found that you are a Distinguished Alumni from Ole Miss University, a highly sophisticated investor and Multi-Millionaire with real estate and financial interests all over the world. Your investments include a large number of wind turbines around Sweetwater, Texas. What puzzles us is, why would you bother to borrow $5,000?”

The good ‘ole boy replied, “Where else in New York City can I park my car for two weeks for only $23.07 and expect it to be there when I return?”

You guys have a great day, and God Bless! Deb’s a hollerin for me to be sure and tell you guys to keep a smile on your face, and one in your heart!

This entry was posted in Ridin out the Recession and tagged gardening, greenhouse, greenhouse construction, recession, self-reliance, vegetable gardening. Bookmark the permalink.

2 Responses to Getting the Garden Ready, and Some Decisions Made on the Greenhouse